by Google Publishers
in Gaming
0

It’s a small world after all…

Publisher Microids, in association with Parisian indie studio Tower Five, has released the first screenshots for the intriguing-looking insect adventure Empire of the Ants, which is currently in development for PC and console platforms, with a tentative 2024 release window.

Based on Bernard Werber’s 1991 sci-fi novel Les Fourmis, (“The Ants”), Empire of the Ants will see layers don the form of a soldier ant, charged with leading its lost colony to safer, finer pastures. Utilizing the power of Unreal 5, Tower Five is attempting to construct a photo-realistic macro world — one that will hopefully encompass the dangers and struggles that face our hard-working friends on a day-to-day basis.

As the self-appointed colony head, the player must guide the ants over and across a variety of different environments, battling various predators and threats, as well as surviving the powerful, all-consuming seasons. Keep your “people” alive, fend off aggressors, and find a new home in which to thrive.

These first screenshots depict the protagonist as they confront ladybirds, scour for sustenance, and face down rival colonies. Even at this early stage, it looks pretty fascinating, and brings to mind the unique, small-world joys of 2009 Wii release Deadly Creatures. 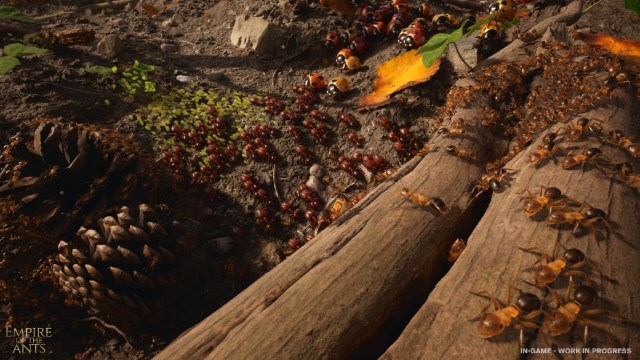 And even without a windswept Joan Collins screaming and swinging around a boat oar, or a small, midwestern town populated by pheromone-controlled rednecks on patrol, Tower Five’s creepy-crawly title has definitely made its way onto my radar.

Empire of the Ants is currently in development for PC and consoles. It is scheduled to launch in 2024.

February is finally upon us! You know what that means: There’s a whole bushel’s worth of movies new to streaming...

The Last of Us Part I Will Now Release On PC In Late March 2023 Delays have been rampant in...

Whatcha been playing this week, Destructoid?

Time’s Up to halt operations, shift resources to legal fund